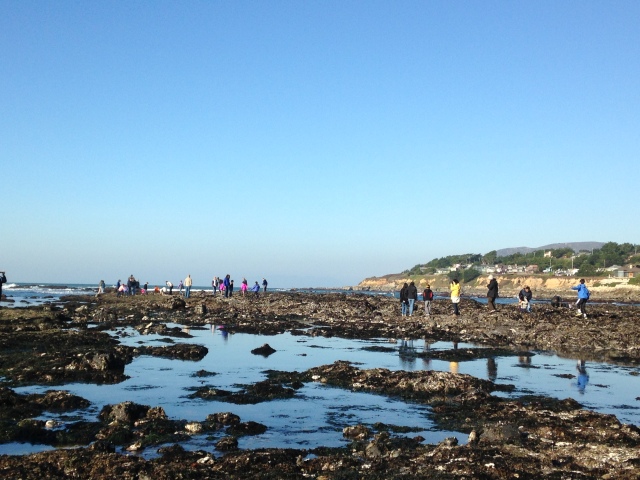 I combed. I scoured. No octopus.

It was midday and the sun was bright, without even a wisp of a cloud overhead. The shy, nocturnal octopus likely wouldn’t be making an appearance. Still…

I hopped from a pitted, rocky outcropping onto a soggy patch of sand, eyes never lifting from the still, shallow pool tucked beside the rocks. Half-submerged and looking like a fat, pickled lime, the delicate fingers of an anemone furled inward against the receding tide. Tiny shells twisted into tidy points scuffled across the pool atop thread-thin crab legs. Beyond, the waves grasped at the shore and slipped back with a low gurgle to the ocean. 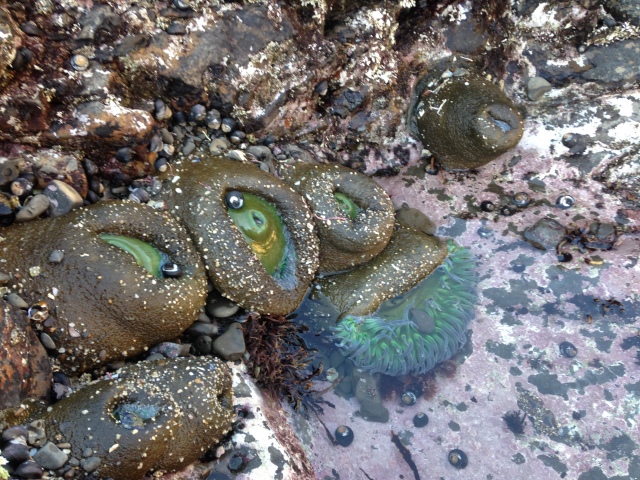 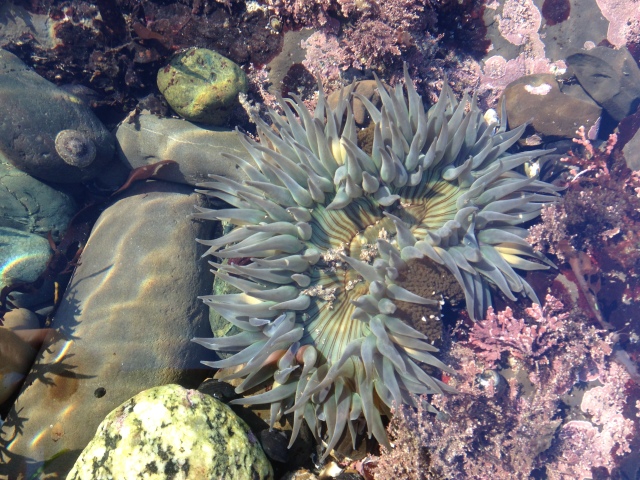 Eyes roving for the subtle flick of a tentacle, I stepped gingerly around clusters of exposed mussels and errant sea snails. A few yards away, two boys around 5 and 7 crouched over a small pool, squealing with delight as one of them thrust his finger in the center of an anemone and watched the creature curl rapidly in on itself. My eyes bugged in horror, but the teensiest part of me envied their naive abandon and the visceral joy that came from such an immediate connection to nature in all its physical, squelchy glory.* 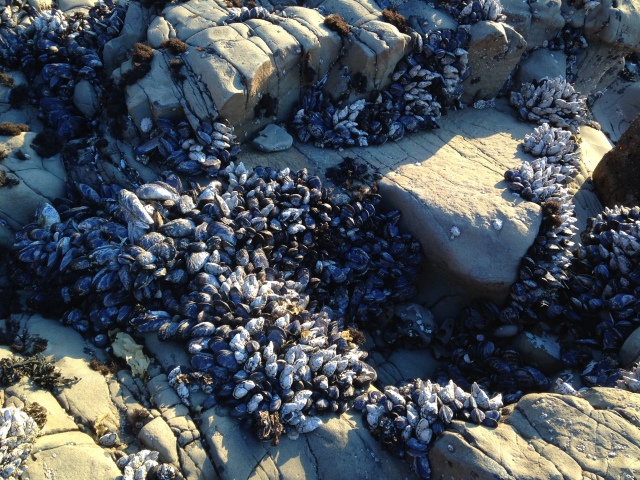 Further down the reserve I noticed a park volunteer stooping down to take a picture. An octopus?! I slipped and sputtered across the algae-slick rocks and peered into a narrow pool sandwiched by small boulders. I saw only a fat, brown blob. “What is it?” 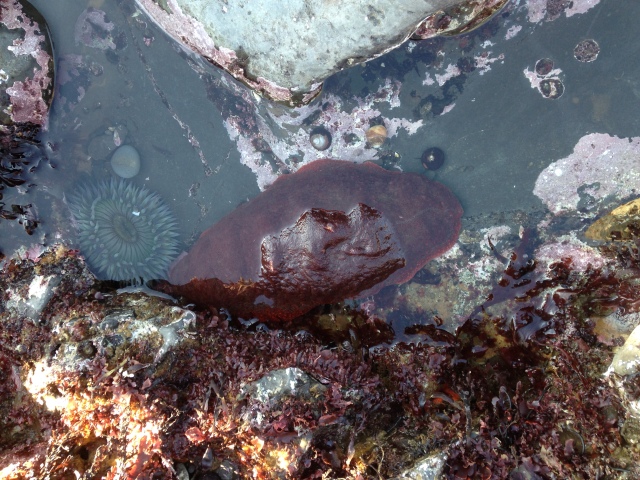 “A Gumboot chiton!” replied the volunteer, a man named Rob with white hair peeking out from beneath a backwards baseball hat. “It’s a mollusk. This one’s a nice big guy.”

A couple ambled over and squatted down to have a look. As I moved over, my gaze fell on a rounded, oblong shell coated in reddish-gray algae. It looked just like a stone except for…

“An abalone!” I shouted, interrupting Rob mid-sentence about the Gumboot’s diet. Yelping in delight, the mother shot up and began waving her arms wildly to call over the rest of her family. We all watched as the abalone slowly contracted, drawing its shell closer to the rock and nearly obscuring its smooth, gelatinous body from view. 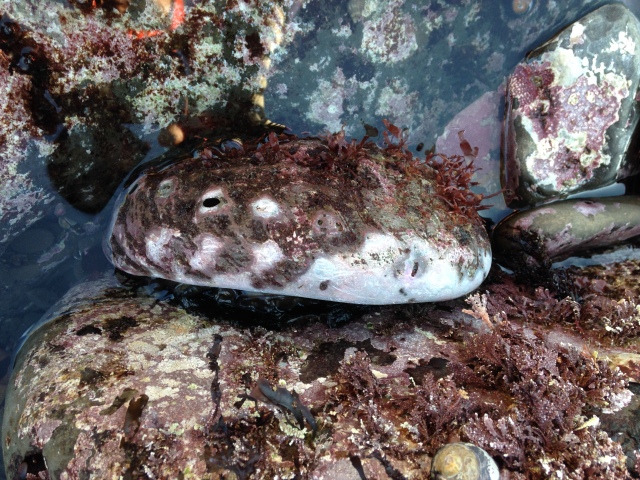 As the sinking sun cast sparks across the ocean, I hopped across wide pools saturated with rippling seaweed and pocked with spiny, purple sea urchins. Near the edge of the reserve, where the rocky reef dissolved into sea foam, I watched a milky-yellow sea star the size of my thumbnail curl its crusty arms against the current. A spider crab side-stepped his way to a shadowy nook. The brackish tang of the ocean air condensed in the cool, evening air and settled softly on my skin. On distant rocks, Harbor seals barked and galumphed, woken up from their afternoon nap by the departure of the sun’s cozy blanket. Somewhere, underneath a rock or beside a colony of anemones gently waving their petals, an octopus was yawning and stretching its tentacles, waking up for the evening.

Fitzgerald Marine Reserve is located off Highway 1 in Moss Beach, CA, about 20 miles south of San Francisco. The reserve opens at 8 a.m. every day, but the closing time varies depending on the time of year. Park rangers and volunteers roam the reserve to answer questions and help protect the wildlife. Download this brief but helpful brochure for a self-guided tour.

*Tempting as it may be, please don’t touch the wildlife. After hearing more than one wince-inducing crunch underneath my sneaker, I asked a park ranger why visitors were allowed to walk among the tide pools where it was so easy to tread on (or, prod and poke) the sea creatures. The ranger responded that the reserve strives to strike a balance between conservation and access, as it’s through access that people are inspired to acts of conservation. 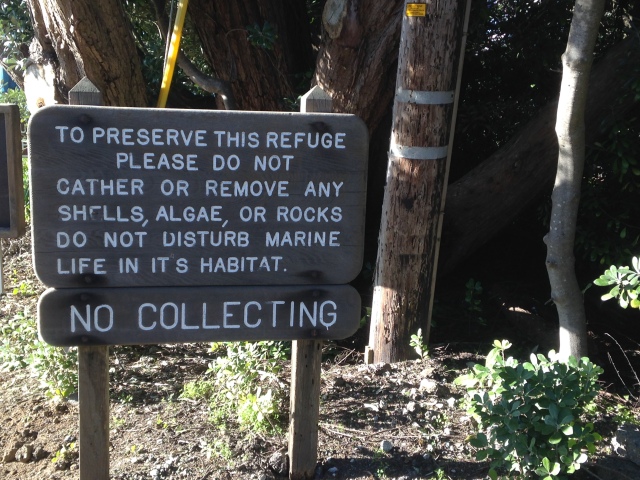